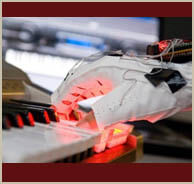 If you asked someone with quadriplegia what function they would most like to regain, you might expect them to say they would like to be able to walk again. A recent poll by The Christopher Reeve Foundation, however said that the one function quadriplegics would most like to regain involves the use of their hands. It's one thing not to be able to walk, it's quite another not to be able to button your shirt, feed yourself, or scratch an itch. Researchers at Georgia Tech have been exploring whether music might just hold the answer.

They have developed a Mobile Music Touch that combines a special glove with a series of tiny vibratory motors. In conjunction with a laptop and music keyboard, this glove teaches people with spinal injuries to play music. In 2008, researchers began experimenting with the glove as a means of teaching people how to play music. A few years later, however, they began to wonder if it would also help people living with quadriplegia. They gathered a group of people who had been injured more than a year earlier, which means their chances for additional recovery were limited to participate in the experiment. They taught them to use the glove to learn to play, then had them practice the piano for 30 minutes three times a week for the next eight weeks. Participants also wore the glove for two hours a day, five days a week, during this timeframe. The results surprised the researchers.

After eight weeks, some participants could feel the texture of their clothing and bed sheets for the first time since their injury. Others were able to pick up small objects for the first time since their injuries. Another patient said he could feel the heat from a cup of coffee immediately after picking it up, which was a sensation that had previously been delayed. The project leader, a Georgia Tech PhD graduate, said she believes the increased motor abilities could be the result of renewed brain activity that might have been dormant as a result of the spinal cord injury. Researchers hope to expand the study to use functional MRI scans to see if the vibration from the gloves triggers the hands' sensory cortex and, in turn, the brains motor cortex.