Making a Difference for The Joseph Groh Foundation

Making a Difference for The Joseph Groh Foundation 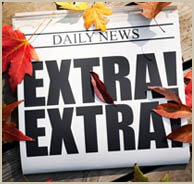 From September 24 to September 27, 2009, two men journeyed on their bicycles from Cleveland, Ohio to Cincinnati, Ohio. This was not just any bike ride however; this ride was made to raise funds for The Joseph Groh Foundation.

Greg Brunner and his friend Bill Topel, made the 310 mile ride through the picturesque countryside of the 3C bike trail. (Cleveland -- Columbus -- Cincinnati) Greg is a friend of Joe Groh, dating back to their days as high school classmates in Cincinnati.

Day one, took the pair from Cleveland to Massillon, Ohio along the Towpath Trail. This trail wound through covered bridges on the outskirts of Akron and alongside the Fulton Canal. Toward the end of that day, Greg and Bill ran across a small obstacle -- a wooden bridge over a densely wooded area that had burned down.

The ride on day two was from Massillon to Mount Vernon, through scenic Fredericksburg. Riding along the Holmes County Trail, the cyclists had to accommodate horse and buggy traffic driven by the local Amish population. In Fredericksburg, they even came across a Car and Buggy Wash/Laundromat. This portion of the ride included some of the hilliest in Ohio.

On day three, the pair rode from Mount Vernon to London, along the Westerville and Olentangy Trails. This includes portions of the old Ohio to Erie Trail. The Olentangy Trail traverses the west side of the Ohio State University campus, just east of the Lennox Town Center Mall along Olentangy River Road. The Lennox Town Center Mall was built on the property of the old Lennox Eastern Division headquarters, where Joe worked in the late 1980s. Greg and Bill got to see the wonder (or perhaps nightmare) of what is game day at Buckeye Stadium, as day three coincided with the Ohio State vs. Illinois matchup.

The final 67 miles were completed on day four, as the pair arrived back in Cincinnati. Riding past the overturned cars of a recent train wreck near Cedarville, one could see workers still pumping out the contents of the railcars. The grain silos of Cedarville led to the station at Xenia, hub of the southwestern Ohio bike trail system.

Greg worked with his wife Becky to raise funds for the foundation. Becky is an employee of Duke Power, and she solicited employee contributions in support of the ride. Duke Power matched the employee's contributions, and altogether more than $2000 was raised.

Our heartiest thanks go out to Greg and Becky Brunner, Bill Topel, the employees of Duke Power, and to Duke Power Company. It is through contributions like yours that the lives of those less fortunate will be made better, and the individuals involved more independent. Thank you!

Click here to see a slideshow or thumbnails of Greg and Bill's Cleveland to Cincinnati ride.