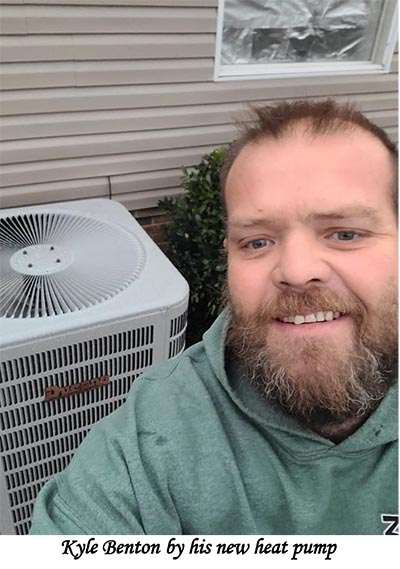 Kyle’s Story
Kyle began working at Martin Marietta, an aggregate rock quarry that supplies materials for the construction industry near Raleigh, North Carolina in 2003. His job included performing plant maintenance and driving haul trucks. In 2007, he moved to the Charlotte area and went to work for Buckhorn Materials, a facility which produces aggregate, asphalt, brick, and other products essential in constructing homes, roads, highways, bridges, commercial buildings and more. He worked there performing plant maintenance, and as a plant operator, haul truck driver, loader and operator. In 2004 he started his own landscaping company, Benton Lawn Care, as a side job. In 2013 he left Buckhorn Materials to pursue his landscaping business full-time. Over the years this work led to severe degenerative disc disease until he couldn’t walk anymore.
His first spine surgery was on May 22, 2017, and spinal issues including infections been nonstop since then. From this date on, Kyle has been in a wheelchair!
Since that time, he has had nine additional spinal surgeries which resulted in a total of 16 screws being implanted in his vertebrae. Kyle discovered our foundation through Internet research and contacted us about his HVAC system. He had a 4 ton seven-year-old heat pump that was installed in 2007, which was no longer operating. In addition, the ductwork underneath the home had deteriorated not only causing air loss, but also introducing mold and mildew because there was water in the ductwork. We contacted Allied Air Enterprises who immediately put us in touch with Joe Hawkins from Hawkins HVAC Distributors in Charlotte. Joe quickly contacted Kenny Hill, owner of Carolina Repair Services and asked him to look at Kyle’s system. Carolina Repair recommended replacing the entire system, along with ductwork, fittings, and other miscellaneous equipment. Joe Hawkins served as GC for the project, making sure everything happened in a timely manner. As a result;
Allied Air Enterprises and Hawkins Distribution supplied a 4 ton Ducane heat pump and indoor unit with supplemental heat, while Carolina Repair Services supplied the labor. The Joseph Groh Foundation paid for other equipment and materials required to complete the installation.
Following the installation, Kyle told us that the new system was totally awesome. “Thank you very much,” he told us. “I’m not one who’s ever looked for a handout, I’ve worked since I was 14 years old. I would not have quit providing for my family, but my doctor said I had to. Unfortunately, I am down again with a terrible spine infection for the third time, and I’m fixin to have my 11th surgery to remove infected bone.”

The foundation certainly hopes this surgery finally eliminates the spinal infections once and for all for Kyle.
Meanwhile, our foundation thanks Allied Air Enterprises, Joe Hawkins of Hawkins Distributors and Kenny Hill of Carolina Repair Services of Charlotte… and YOU, our wonderful donors!