Word Starting to Get out about the Joseph Groh Foundation

Word is starting to get out about the Joseph Groh foundation! The reality of that progress however proves to be a duel edged sword.

For a while, board members were scratching their heads. After all, the foundation had funding, a clearly defined mission and a forum for communicating its message. Six months after completion of a successful golf outing, no one had stepped forward requesting assistance. The message was delivered throughout the HVAC and construction industry through print media, industry associations, foundation newsletters, Google search advertisements (courtesy of Google grants) word-of-mouth, Facebook, personal and professional networks. Still, not one request.

In October, the focus expanded. Two of the board members attended a meeting at the Baylor Institute for Rehabilitation in Dallas. One of the top rehabilitation hospitals in the US., Baylor Rehab specializes in traumatic brain injuries, spinal cord injuries, strokes and other orthopedic and neurological disorders. The focus of this meeting was to introduce foundations and organizations offering assistance to disabled to patients, their families and caregivers.

During the same month, one of the foundation's board members became involved with some of the communities inside the Christopher Reeve foundation as well as with the National Spinal Cord Injury Association. The synergy of these combined communication efforts began to yield fruit toward the end of 2010.

In late November, the foundation was contacted by a woman from Bryan, Texas who had suffered a spinal cord injury in a January 2010 motor vehicle accident. She and her husband owned a plumbing contracting business there. The foundation was able to help her find a handicapped van and retrofit it with hand controls for driving. She had learned of the Joseph Groh foundation through one of the online communities within the Christopher Reeve foundation website. In December, word-of-mouth communication from one of the board members yielded a request from an Amarillo, Texas man who had been paralyzed in a motor vehicle accident in July 2010. Two of his uncles are employed in the earth moving equipment and paving construction industry. In order to continue his collegiate studies, he needed a transfer system, stowaway wheelchair lift and hand controls for driving his pickup truck. Unfortunately, after funding these two requests the foundation was out of funds. Word about the foundation however continued to spread.

In the first two weeks of January, the foundation has been contacted by three more individuals. The first is a lady from Oklahoma whose son was paralyzed in a recent car accident. She is looking for help to remodel her bathroom so he can access. At present he can only take sponge baths. The second is an Indiana man who has been paralyzed for many years as a result of a diving accident in Lake Michigan. Out-of-pocket costs from recent hospitalizations threaten to cause him to lose the handicapped van he is making payments on, which he depends on for transportation. Both of these individuals have relatives working in some aspect of the construction industry. The third individual is an Illinois woman whose husband worked as a technician in the HVAC industry until his sudden passing from a heart attack 5 years ago. His wife was stricken by a brain aneurysm and is being provided 24 hour care by her sister, whose husband is also an HVAC technician.

The foundation is committed to working with any individual contacting us in every way possible. We are working with these individuals in a variety of ways. We are working with the woman from Oklahoma by helping to insure she understands the statewide resources that are available to her. We're working with the other two individuals in several different ways, including seeking a remodeling contractor who might be willing to provide renovation services, as well as helping with information requests and the identification of other sources of assistance. The spreading word about the foundation serves to both personalize our efforts as well as to solidify our stated mission. We very much appreciate our supporters who are the ones that make it all possible, and we look forward to meeting the expanding requests for assistance in 2011 and beyond.

How Can I Help Page

Mark Your Calendars for March 27 and April 28 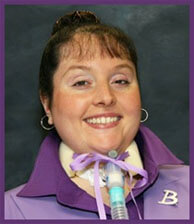 Young Brooke, age 11, was looking forward to her first day of 7th grade. Following school that day, friends persuaded her to walk home with them instead of taking the bus. That turned out to be a fateful decision.

Crossing a street on the way home, Brooke was hit by a car. The impact left her a quadriplegic, paralyzed from the neck down and not expected to survive. Dependant on a ventilator for breathing, Brooke spent the next year in the hospital. Her mother became her full-time caregiver, helping her keep up with school work. The following year, Brooke returned to school as an 8th grader, and graduated with high honors 5 years later from high school.

Following her graduation from Harvard, Brooke and her mother wrote a book entitled "Miracles Happen". She was also was contacted by actor Christopher Reeve, (Superman) a quadriplegic himself, about the possibility of doing a movie. The Brooke Ellison Story debuted on TV in 2004, with Ellison portrayed by Lacy Chabert. Directed by Reeve, it aired shortly after his death from heart failure. In November 2006, Brooke ran for the New York State Senate, and her campaign focused on healthcare, education and housing. She was defeated by the Republican incumbent. In September 2008, she became the longest surviving vent dependent quadriplegic. Currently, Brooke continues to champion embryonic stem cell research and serves on the advisory boards for a number of different organizations.

Taken from her website, Brooke talks about her life with these words. "My experiences, both inside and outside the classroom, have been with one goal in mind: helping to empower those who face adversity or discouragement of any kind. Through research, writing, and the spoken word, I have tried to use my own experiences as a vehicle to encourage others." Brooke Ellison is a continuing inspiration for all of us.

IINODTIA (in-odd-teuh) def: an expression in disability circles which is interpreted as - if it's not one damn thing it's another.

Synonym: That's the way it is bud, get used to it; That's life.

This expression is best understood if used in a Jeff Foxworthy kind of way. For those poor, uncultured souls who are not familiar with Jeff Foxworthy, he is known for his redneck jokes. One such example is, "You might be a redneck if you stare at an orange juice container because it says CONCENTRATE."