Osteoporosis is not just a concern for aging, able-bodied people. It is of special concern to those with spinal cord injuries, and this article provides additional insight into the link between SCI and this bone deteriorating condition.

What exactly is osteoporosis? It is a condition in which bone mass (or bone mineral density) decreases. The term "osteo" means bone and "porosis" means spongy, which is just how osteoporotic bone looks on the inside. While normal bone has small holes in it, osteoporotic bone has much larger holes. These holes make it much easier for bones to break. Osteoporosis occurs in almost everyone during the aging process. In people without disabilities it is much more common in women, especially in those who have already been through menopause.

Osteoporosis occurs throughout the body and the result is that bones may break very easily or even for almost no reason at all - during range of motion (such as stretching), after a minor fall, or even after a bad spasm. The good news is….just because you have osteoporosis, it doesn't mean you'll have a broken bone. According to the National Research and Training Center for Spinal Cord Injuries, only about 6% of people with SCI have brittle bone-related fractures. That may seem like a lot, but statistically the odds are still in your favor.

Immediately after spinal cord injury, they report that bone resorption, or breakdown, begins to occur within days. Another unique finding after SCI is that within days of injury the body starts dumping minerals such as calcium into the urine. This calcium was originally in the bone and was resorbed, or lost into the blood and then leaves the body in the urine. Although this bone loss cannot be seen on x-rays for months, we know it's occurring because calcium and other chemicals released during bone breakdown occurring in blood and urine shortly after injury can be measured. This bone loss is greatest in the first 3-12 months after injury, but still persists for several years after your injury.

It is not known exactly what causes your bones to break down so much after SCI, but there likely are several causes. One factor is activity. We do know that when you exercise, muscle pulls on bone and this actually helps bone become stronger. After a spinal cord injury, some of your muscles are no longer able to function properly due to the paralysis, and therefore, are not able to pull on the bone to keep it strong. Because this bone loss occurs so rapidly after SCI there likely is something else about the SCI itself, such as a change in the autonomic nervous system and/or circulatory system, that makes osteoporosis worse.

When the study looked at the bone mass of people with spinal cord injury, they actually saw that bone loss is greatest in areas that are paralyzed. For example, if you have paraplegia and use a wheelchair, you likely have had bone loss in your legs but not your arms. The muscles in your arms are still functioning and pull on the bones to keep them strong when you perform many activities, such as pushing your wheelchair and transferring. Even the bones in your spine are kept strong because to maintain your posture, some or all of the muscles in your back are pulling on those bones. If you have tetraplegia (you may be more familiar with the term 'quadriplegia'), you have likely lost bone mass in your legs, arms shoulder and and spine as well.

In short, if you have a SCI, you have osteoporosis. In the time period shortly after your spinal cord has been injured, your body is rapidly dumping the calcium from your bones into your blood and urine. This is when osteoporosis can be diagnosed through blood work and urinalysis. Later, and for the remainder of your life you will need higher tech x-rays such as DEXA or CAT scan to diagnose osteoporosis.

Thus far, effective treatments to restore bone mass that has been lost after spinal cord injury haven't been found. The general consensus is that you can't bring lost minerals back into bones. The best advice is to do everything you can in your power to prevent further bone loss. Tips for accomplishing this includes stopping smoking, limiting alcohol and caffeine intake, continuing with physical and occupational therapy, eating a proper diet and getting out into the sun without getting sunburned. Vitamin D is made in the skin while you are in the sun.

Remember that although osteoporosis in SCI patients is a fact, most people with SCI are not breaking bones. Thousands have made it to ripe old ages without breaking anything. The odds are in your favor and there are many ways to reduce your risk.

Thanks to the National Institute on Disability and Rehabilitation Research for this article.

Spinal cord injury is not the only cause of paralysis. According to the Christopher and Dana Reeve Foundation, nearly 5.6 million Americans are paralyzed, with the average age of those reported being paralyzed being 52 years. Causality reported as follows.

In addition to these golfers, 22 corporate and individual sponsors, 16 donors and 12 volunteers were involved in making this fundraiser a success! In all, the event raised over $17,000 (after costs) to help those afflicted with spinal cord injury and other life altering disabilities. To all the golfers, sponsors, donors and volunteers, board members of the Joseph Groh Foundation say Thank You! 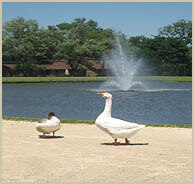 While many golfers found the sand, these were unfortunately the only birdies some golfers saw that day!

Ken Klein wouldn't consider himself Superman. He does, however, share the condition that "Superman" star Christopher Reeve dealt with the final nine years of his life -- a high spinal cord injury that makes him unable to use his arms or legs.

To move his wheelchair, Klein has what is known as a sip and puff control system that directs the chair right or left, forward or back, fast or slow.

"Stuff happens," said Klein, a 71-year-old Iowa City resident. "You always hear about it happening, usually to somebody else." "I've been fortunate since that time; could have been a lot worse," Klein said.

Klein was a school teacher for 35 years, including 30 years at City High, where he taught driver's education. "It was a good 30 years," he said. Before the accident, Klein was an outdoor enthusiast who loved time on his bicycle. He rode his first RAGBRAI in 1974, skipped the year after that, and then didn't miss another for 30 years. Even when he taught summer school, Klein always arranged his schedule to have time for RAGBRAI. He also participated in two cross-country rides -- a 100-day trip that took him coast to coast in 1995 and another from New Orleans to the Canadian border in 2005. There were summers after he retired where he would walk 1,000 miles, bike 2,000 miles and golf 100 times. He walked every morning from their Iowa City home to St. Wenceslaus Church on Davenport Street. People he didn't know, but who recognized his daily presence walking on North Dodge Street, would wave as they passed by, he said.

His life-changing injury happened while he was outdoors, riding his horse on a friend's property out in the country. Sue Klein said she remembers looking across the road and seeing her husband's horse, but no one on it. They found her husband curled up on his side on the ground. "Stuff happens, and it doesn't take long to change people's lives completely," Ken Klein said. Klein, in fact, says he is lucky that it didn't happen to him earlier in life. "I was always pretty stupid. I'd always try anything or think I could do anything," he said. The same day Klein went into the hospital, a man his same age tripped on a curb, causing a similar spinal cord injury result, he said. Sept. 28, 2010, will mark four years since Klein's accident. "I didn't think I'd last half that long," he said. "I think there's always a reason for it," Klein said. "In the scheme of things, this is the way it was supposed to be."

It's hard for Klein to travel now, and he can't enjoy the outdoors like he used to. "I used to love being outdoors, but it was always for a purpose," he said. Just being out of the house "doesn't do it for me," Klein said. Even though he can no longer ride, Klein said he can't quite bring himself to sell his bicycle. "That bike and I spent quite a bit of time together," he said.

Klein and his wife's lives are now filled with his daily medical needs, including waking up every three hours in the night to turn him from prevent bed sores. "Life is good if I can keep my wife healthy enough to take care of me," he said. Klein jokes that he's now "high maintenance" and knows it is hard for his wife because "once she starts working on me, there's not much time for what she wants to do." "He's worth it, though," Sue Klein said. "We're blessed," Ken said. "Yes, we are," his wife replied. 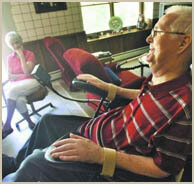 Ken Klein and his wife Sue, in their Iowa City home.

Top 10 Ways to Treat Quadriplegics In a Wheelchair